The inshore races on Thursday were perfectly scheduled. Firstly, it was the day of the regatta dinner so we could be sure we wouldn't be stuck somewhere off Ryde as the dinner started. Secondly it was pretty breezy and would have been a bit lively outside the Solent. And finally there were three classic yachts racing in the Solent very near to where we were. 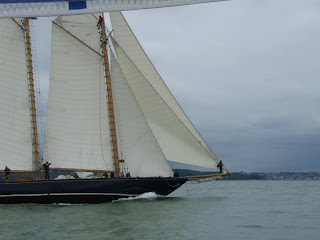 Thursday’s trio of races used committee boat starts giving more choice of starting areas. Once again the wind speed meant “no spinnakers” were signalled which, if not playing to our strengths, meant our potential weaknesses were less exposed. Race 5 was twice round a sausage where CSORC 2 learnt only for the second lap that goose-wing was the best down-wind set - only 11th place. Then another setback, as the start of Race 6 saw us being pushed outside the committee boat so we had to tack round and start again in last place. Even so we made up a few places to finish 11th again.

An excellent start to Race 3 was made even better by 5 boats being called OCS, and then came a bold move. A large tow heading West threatened to split the fleet crossing its path southwards to the first mark. We had put ourselves on the lay line, but could we clear the stern of the tow without tacking? Intense focus on the transit and Andrew’s superb helming meant we cleared the tow safely, made the mark in 2nd place, and held it round the next mark. But another tactical error by skipper Phil lost us a few places so that we finished 6th just ahead of CSORC 1.


The prizegiving after the Regatta Dinner on Thursday evening saw CSORC go up four times to receive silverware, bottles, and a first time skipper medallion.  CSORC 1 won the Elite Cup for the most improved boat, while CSORC 2 won not only the pontoon party prize but also the CSORC Shield for the leading CSSA club boat.  It was the first time the club has won its own trophy, and the target for next year’s IDOR is to hang on to it!