The Round the Island race in the IDOR had been scheduled for Wednesday but was then switched to Thursday on the forecast of better wind. And so it was. A downwind start westwards (at 7:30 !) against the tide. We went inshore to start, as did the majority, then sacrificed tide for reaching angle and speed as we went into the main channel. The wind was NE F4 and it was grey and overcast. Halfway down the Solent we had a slim lead, with the majority of boats inshore at the island side looking for less tide, and a couple on the mainland shore. 3 or 4 boats were with us in the middle, but behind us. After Newtown our strategy started to look less clever as the inshore boats picked up a fair tide while we were still in foul. We should have gone inshore right then but we stuck it out and watched much of the fleet go past us.

At the Bridge buoy we doused the kite and started a long slog into the wind. At St Catherines the wind became super-gusty as the wind came over the hills. We stuck out the gusts close in, trying to buck the foul tide. Loads of boats were getting periodically flattened by the gusts and a couple put reefs in. A couple also got past us in the lulls under the lighthouse.

Next a long beat up to Bembridge. We went offshore to find some weaker tide and gained a handful of places. Once round Bembridge we went inside the fort but outside the red posts and the sandy bits. 37 had gone aground ahead of us, and didn't get off for an hour or so. In this leg the remaining boats just gradually sailed past us, the last one almost at the line. We must have been towing a bucket, but anyway we were all exhausted, wet and hungry.

We had to prime the cooling system before starting the engine, and arrived in harbour after six (I think). Not a good result but an excellent day's sailing and a baptism in "offshore" for more than one of the crew.
Posted by CSORC at 08:27 4 comments: 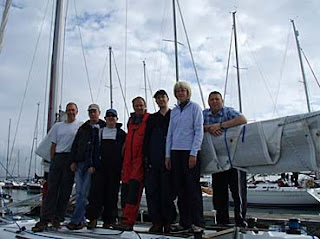 Well the wind came in around 9:30 and we have just had a fantastic day's sailing. We've been playing musical chairs with a starting helm, a racing helm and a "can't you guys do anything right" helm, as well as an upwind crew and a downwind crew. After two days as novice sailor/foredeck hero, Peter Denison has now got some help from Fastnet veteran Nick Huxford and we have a bit of slack in crew numbers. We had been sailing with a crew of 6, but we haven't been at all shy about getting the kite up. Today the sun came out and the wind hit a very solid F4 giving us a brilliant afternoon of racing. All three races were completed though there were a couple of shortened courses.
We are currently in 12th place out of the 20 boats having scored a 15th, 16th and 14th today.
Tomorrow is forecast to be a breezy and maybe wet day for the race round the island.
Meanwhile news is that Trevor Drew and Richard Palmer are in Kinsale after the first leg of their Round Britain and Ireland two-handed race. We wish them well for the next leg.
Posted by CSORC at 18:35 No comments:

Oh no, not again!

Last year the IDOR was a driftathon, so it was nice to be blasting along barely in control under grey skies, yesterday. But today racing has been postponed and the water is like glass. Hopefully a breeze will pick up later and in any case we have a promise of lots of wind tomorrow for the race round the Isle of Wight.
Posted by CSORC at 09:10 No comments:

After last year's regatta of no wind and much frustration it was a change to wake up to torrential rain. It cleared and we headed out to a decent force four start to our campaign and first race. This was the long inshore race - a beat up to Hurst and out through the north channel and Christchurch bay round a racing mark whose name escapes me, and back again. Those simple words don't reflect the reality. Our start was adequate and we spent the beat making some ground on other boats before rounding the racing mark.
Once round Hurst - much easier than last year in the SW wind - we hoisted the kite for a long sleigh ride back to the line off Cowes. We were happy with 9th place and Peter the novice bowman was initiated into the delights of the broach en route. A brilliant sail all round. Everybody worked hard.
The second race of the day was the first inshore. From the start we beat west to Gurnard then a short reach and a long run. The wind had built and the ambitious who launched a kite had a mixed time of it. Our result of 13th out of the 20 entrants was enough for us.
This evening we visited the Royal London for drinks before retiring to the Pier View for a small sherry and canapes.
Posted by CSORC at 23:13 No comments:

On Sunday the crew assemble at Port Solent and take over our allotted Sunfast 37 for the next five days. We shall be preparing the boat prior to departing for the Solent on Monday for some practice. There's a practice race off Cowes at 16:00, then we go into Cowes for a skipper's briefing.

Racing proper starts on Tuesday with a long and short inshore race. We shall be posting updates as they happen (wifi permitting).

Nick Bowles
Posted by CSORC at 13:13 No comments: