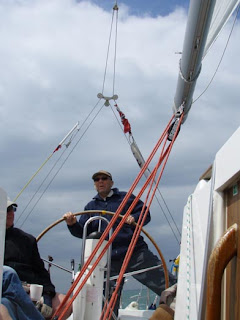 The day dawned bright, a bit chilly, and by no means wind-free. A ten o'clock warning signal meant that crews could recover from a late night.

The course was out east to Warner, just beyond the forts, then back to Spit Sand fort. The tide was building strongly against the start so most chose to start inshore, even amongst the moorings just off the Shrape. It was a spinnker reach but approaching the headland of Norris the wind was really fluky and those who had gone offshore seemed to have the better of it. As the wind came ahead many were forced to bear away, while others dropped their kites. Our aim was to stay over the banks but whatever we did we were slow and fell behind.

From here things were uneventful. We rounded Warner with 21 a long way in front, and 5 a long way behind. So we just relaxed while trying not to take our collective eye off the ball. We crossed the finish line (Spit Sand bearing 270) at 13.38 and headed for Portsmouth and Port Solent. Not a great performance for us but we had sailed every course without major mishap and had used the kite on every downwind leg and even the occasional close reach. A great week. Enough said.
Posted by CSORC at 20:47